A few years ago, I remember hearing about someone using a nitrous-charged whipped cream maker to make e.g. cordials very quickly. They’d put the fruit or the herb in the whipped cream maker along with some grain alcohol, pressurize it with a canister of N2O, and shake it. Due to the increased pressure, the extraction which would normally take weeks of steeping was taken care of in minutes.

This week, I decided to apply the idea to coffee. I am pleased to report that it is possible to produce excellent, wonderfully strong coffee at room temperature in about one minute with a whipped cream maker. 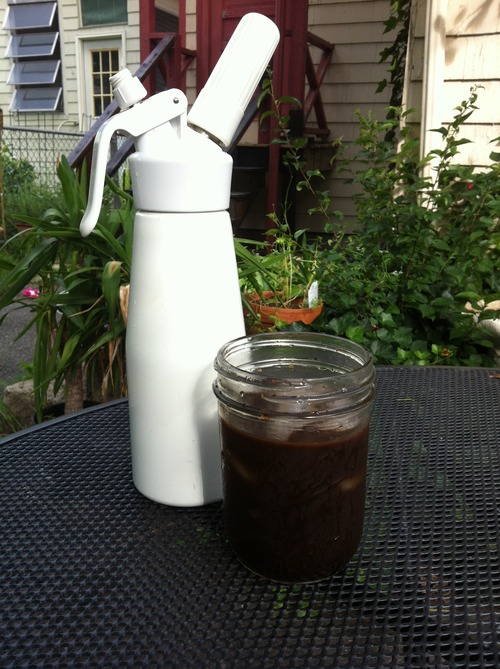 My usual way of brewing coffee is to grind the coffee very fine, between espresso and turkish grind, and pour in boiling water. In about two minutes, I stir; two minutes later I stir again. After another several minutes, I decant the coffee into a mug, leaving the grounds (mostly) behind.

For this experiment, I used my usual amount of ground coffee — about three fluid ounces when measured in a jar — and eight ounces of water. I added the coffee and water, pressurized with one nitrous oxide canister, and shook it all up for about one minute. I then released all the pressure, being extremely careful not to inhale any of it, extremely careful indeed.

Scribbling some gibberish onto the back of an envelope, I figure that using my 0.5L charger with a standard 8g nitrous oxide cartridge, the coffee was brewed at a pressure of eight times atmospheric pressure, or about 120 psi.

Once the pressure was blown off safely and responsibly, I opened the whipped cream maker and poured the foamy brew into a jar to settle. A stir here, a stir there, and I poured it off into a glass with ice, trying to leave most of the grounds behind but failing somewhat.

I am left with delicious iced coffee, strong and sweet without a hint of acid. It’s as good as any 24-hour cold water brew I’ve made, and this in the time it takes to make a cup of instant. Makes great tea too! 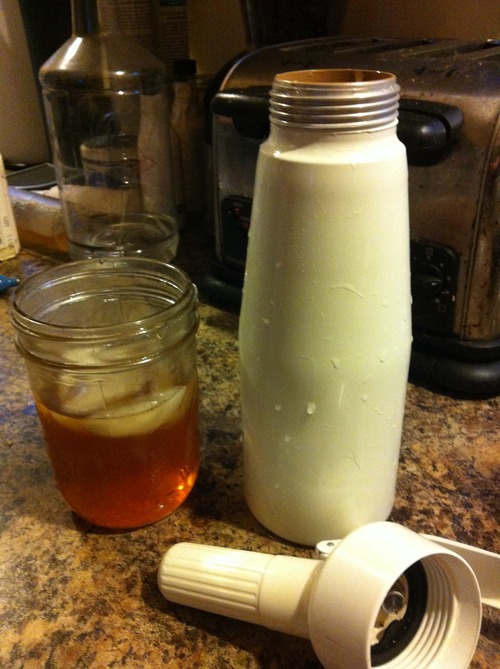